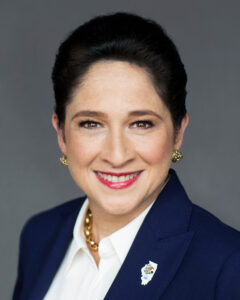 Susana A. Mendoza was sworn in as Illinois Comptroller on Dec. 5, 2016, after running for office on a platform of prioritizing the most vulnerable residents at a time when the state had gone without a budget for more than two years.

Now in her third year as comptroller, Mendoza has initiated a transparency revolution in state government, working with legislators of both parties to introduce and pass several transformative measures that make state financial information more publicly available than ever before. This includes the Debt Transparency Act, the Truth in Hiring Act, the Budgeting for Debt Act and the Vendor Payment Program Transparency Act.

Mendoza is a trailblazer when it comes to women in politics. She was the first Hispanic independently elected to statewide office in Illinois after her historic win as the first woman elected Chicago city clerk in 2011. She was also the youngest member of the Illinois General Assembly when she was elected to the House, where she served six terms, representing Chicago’s southwest side, including Little Village, where she was born.

Mendoza lives in Chicago’s Portage Park neighborhood with her husband, David Szostak; their son, David Quinten Szostak; and her mother.