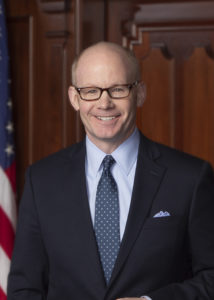 In January 2020, Don Harmon was elected by his colleagues to serve as the 39th President of the Illinois Senate, vowing to lead a new era of ethical progress as the Senate works to rebuild trust in public service and rationalize state tax policy.

Harmon, an Oak Park native, was first elected to the Illinois Senate in the fall of 2002. During his time in the General Assembly, he championed early childhood education, ethics reform, curbing gun violence, protecting civil rights and expanding voter access.

Harmon was an early supporter of Preschool for All programs and sponsored the Illinois Early Learning Council.

Harmon led efforts to win legislative approval of the Fair Tax constitutional amendment that will give voters the opportunity to overhaul the state’s antiquated tax system.

In the Senate, he previously served as president pro tempore and chaired the influential Executive Committee.

Harmon has an undergraduate degree from Knox College in Galesburg, Illinois and a law degree and MBA from the University of Chicago. He was a founding member of the Boat Drink Caucus band, a bipartisan group of lawmakers who set aside politics to perform at small venues across the state.

He and his wife, Teresa, are the parents of three children: Don, Frances and Margaret.